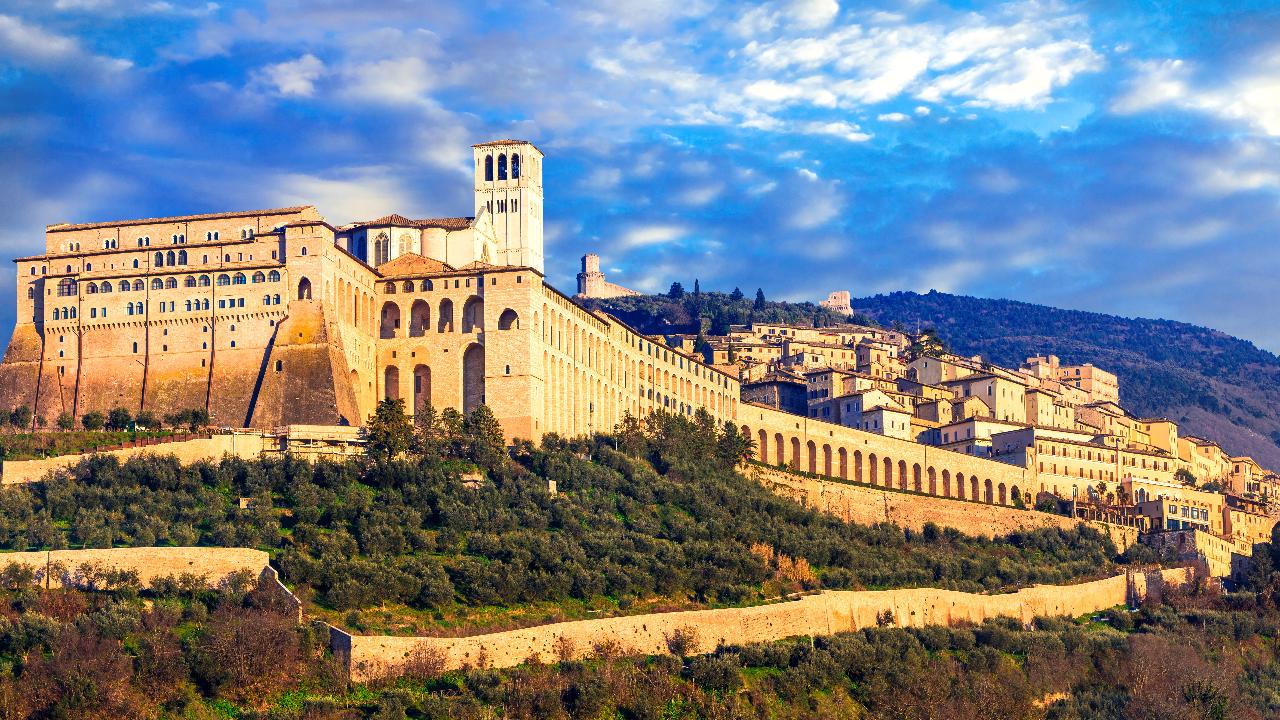 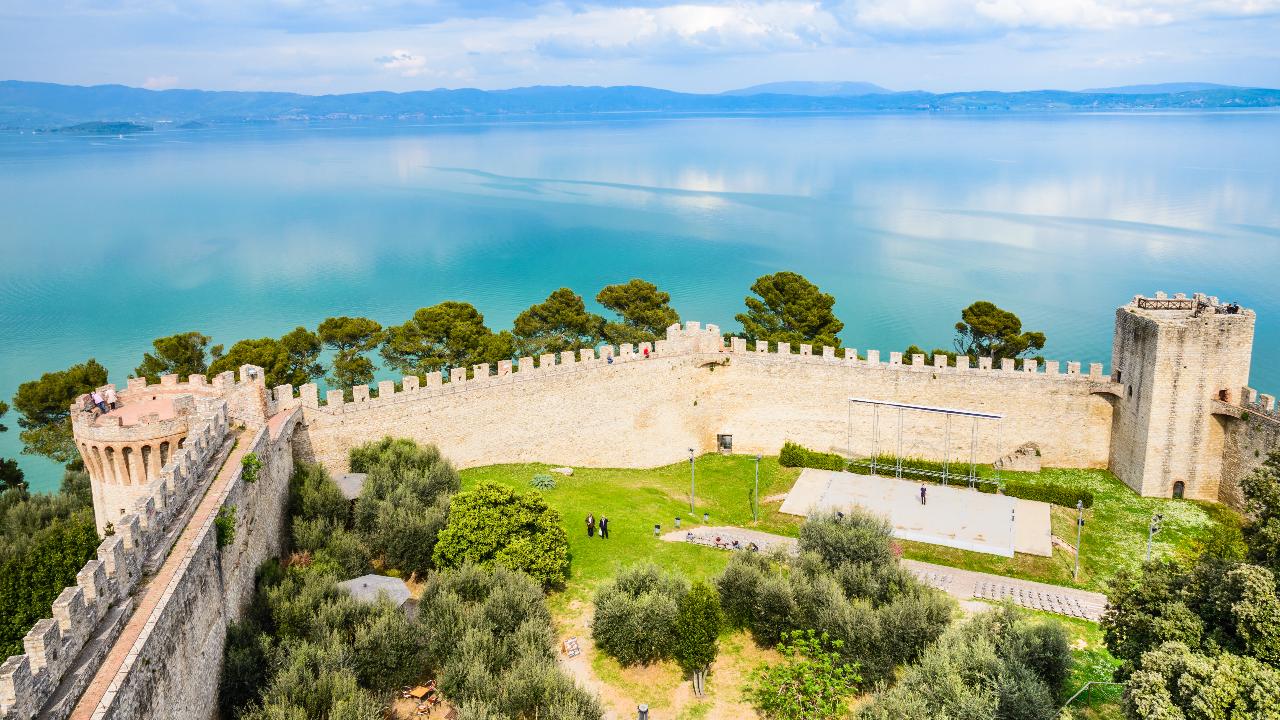 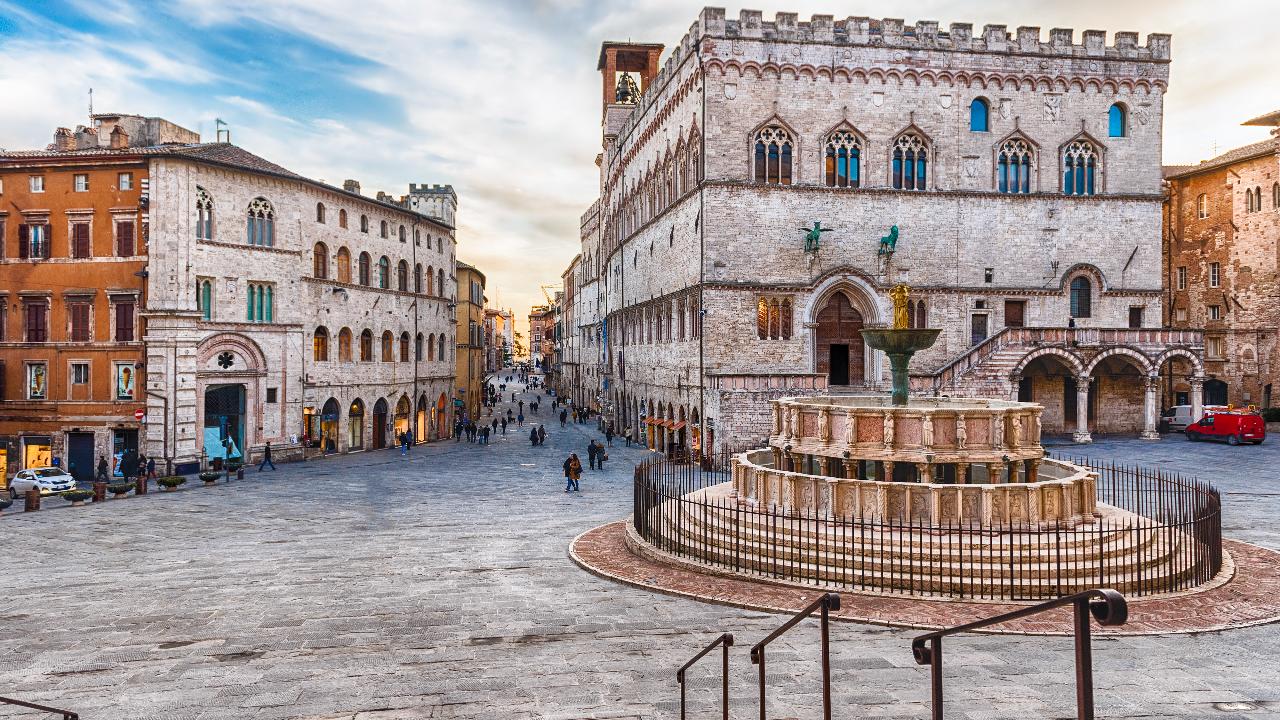 Hills, mountains, basins and stupendous valleys that stretch along the course of the Tevere River, which crosses the region from north to south. This is Umbria, the only land in central Italy that does not border the sea, but which on the other hand has the largest body of water in central Italy, Lake Trasimeno, and the highest waterfall in Europe, the Cascata delle Marmore, near Terni, which makes a jump of 165 meters. Then endless Renaissance masterpieces and medieval villages set among the hills, such as Gubbio, an ancient city that has the best evidence of its medieval splendor in the cathedral, in the Palazzo dei Consoli and in the Ducal one. Orvieto, on the other hand, one of the most important Etruscan cities, has in the Duomo one of the masterpieces of Italian Gothic art, while Spoleto, city of the Longobard dukedom, preserves precious vestiges among its stone paths that are the backdrop to the famous Festival dei due Mondi .

And, again, Assisi: a medieval city that is on the list of Unesco sites “World Heritage of Humanity”, with the Basilica dedicated to St. Francis, the tomb of the saint and Giotto’s frescoes in the Eremo delle Carceri; Perugia, the capital of Umbria, which is a city of ancient Etruscan and Roman origins and where medieval villages and districts are connected to the highest city, lying on the hill; Spello, one of the most beautiful villages in Italy, with its pink-colored houses and the best preserved Roman fortified walls in Italy; Norcia, homeland of San Benedetto, with the statue and the path dedicated to him.

For your catering: the “Arvortolo”, a fried pizza made with flour, oil and salt; the “Torta al testo”, that is the Umbrian focaccia par excellence, to be enjoyed with Prosciutto di Norcia and Pecorino cheese; the “Farrecchiata di roveja”, with roveja flour, a legume similar to pea, cooked like polenta; the “Strangozzi”, thick fettuccine served with a variety of sauces; the “Palomba alla ghiotta”, a pigeon with a sauce dressed with capers, olives, livers, bread and ham; the “Impastoiata”, made with polenta and borlotti beans; “Mazzafegato”, a coarsely chopped pork sausage with the addition of rind, liver, garlic, lemon or orange peel and fennel flowers; the “Galantina”, a hen stuffed with meat, eggs, salami, pistachios, cream and truffle; the “Ciccotto” of pork, in many ways similar to porchetta; the “Friccò all’eugubina”, a sort of stew of white meat (chicken, lamb, rabbit) with vegetables; the “Parmigiana di gobbi”, made with fried and au gratin cardoons with tomato sauce, mixed mince and cheese; the many cured meats that arise from the art of Umbrian butchery. Among the desserts: the “Torcolo”, a donut made from a leavened dough with candied citron, raisins, pine nuts and anise; the “Crescionda”, a cocoa and amaretti cake; the “Brustengolo”, a sweet corn bread with apples and dried fruit (raisins, pine nuts, hazelnuts, walnuts); the “Rocciata”, a thin and crunchy pastry made with flour, water and olive oil that contains a filling of walnuts, apples and dried fruit. Wines: Grechetto, Sagrantino, Torgiano, Spoleto, Spello, Amelia, Colli Perugini. 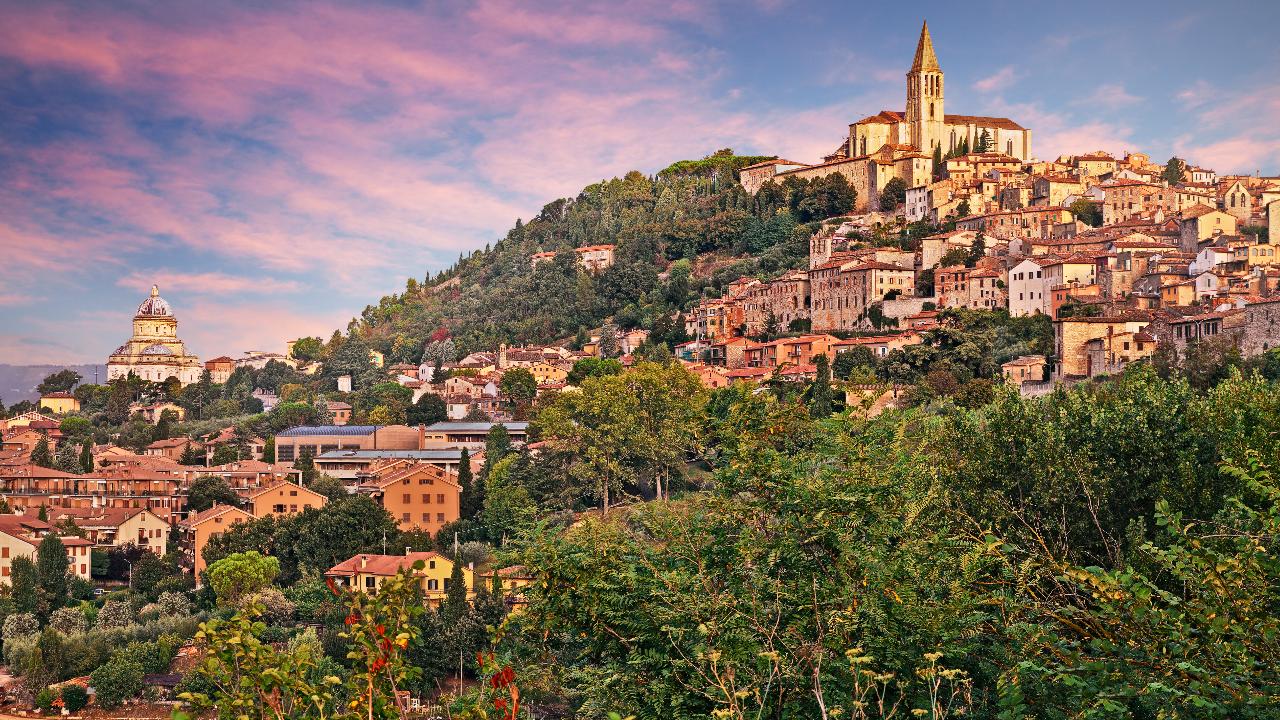 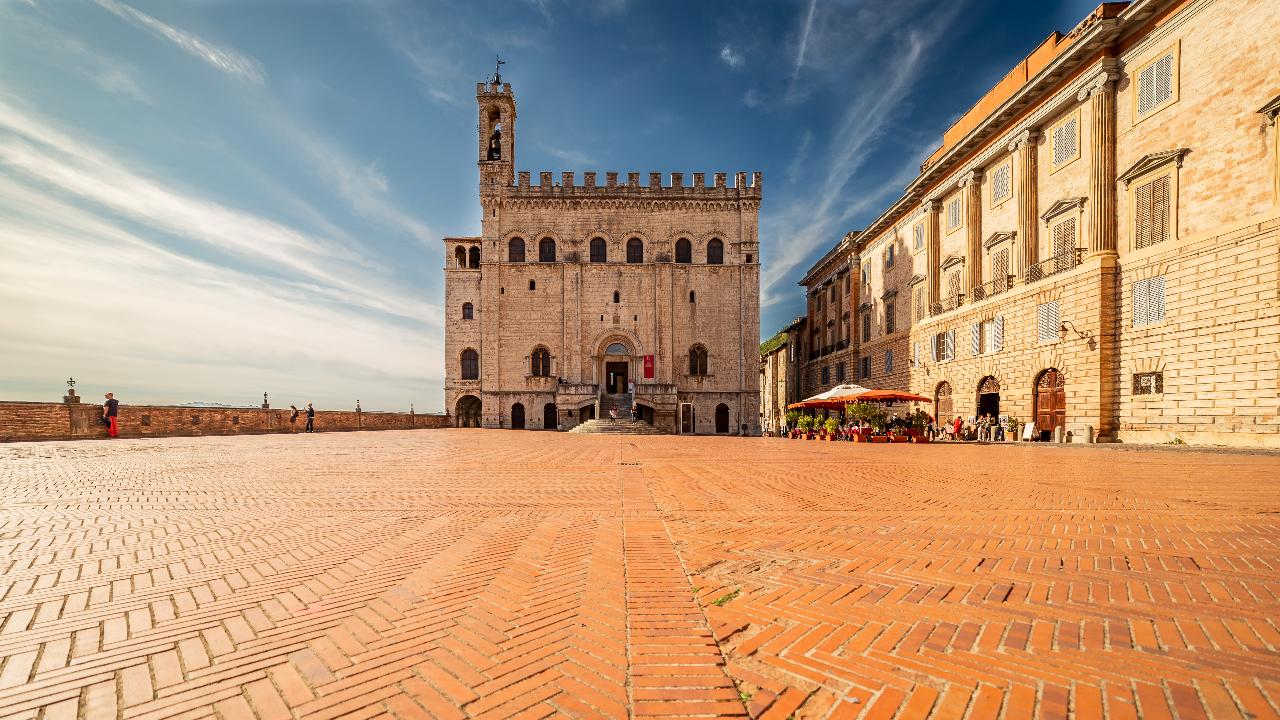 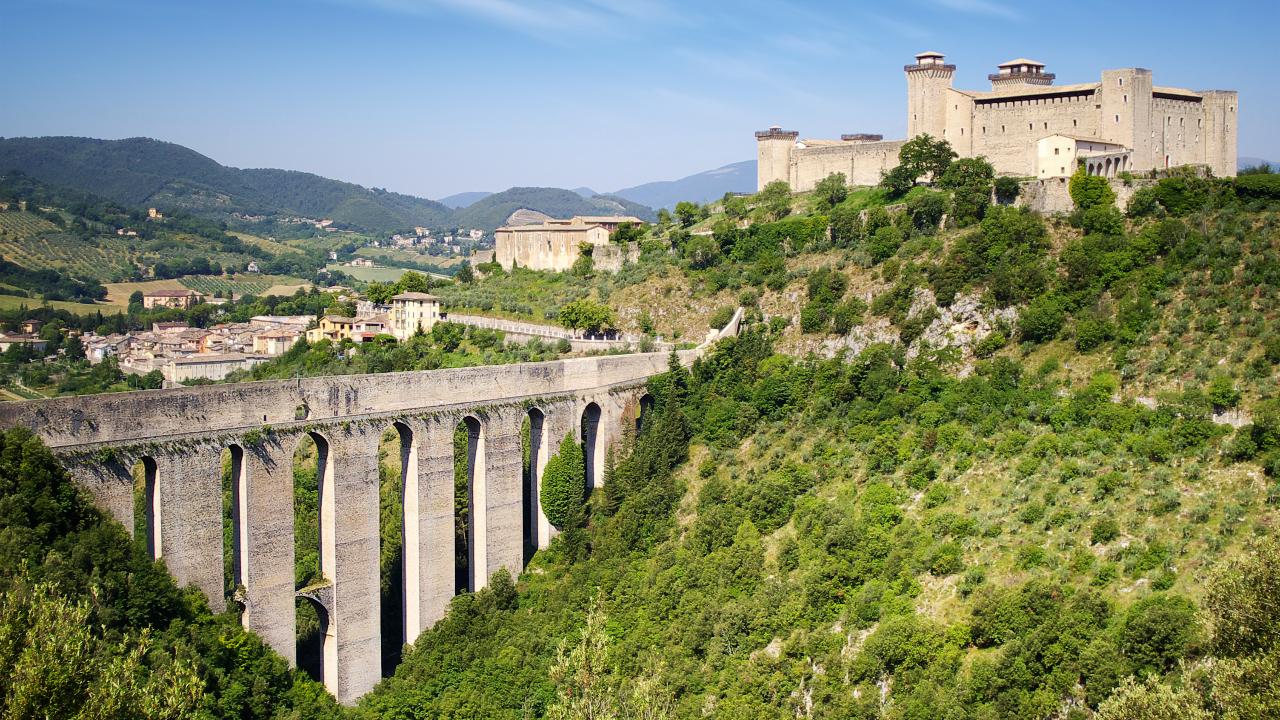 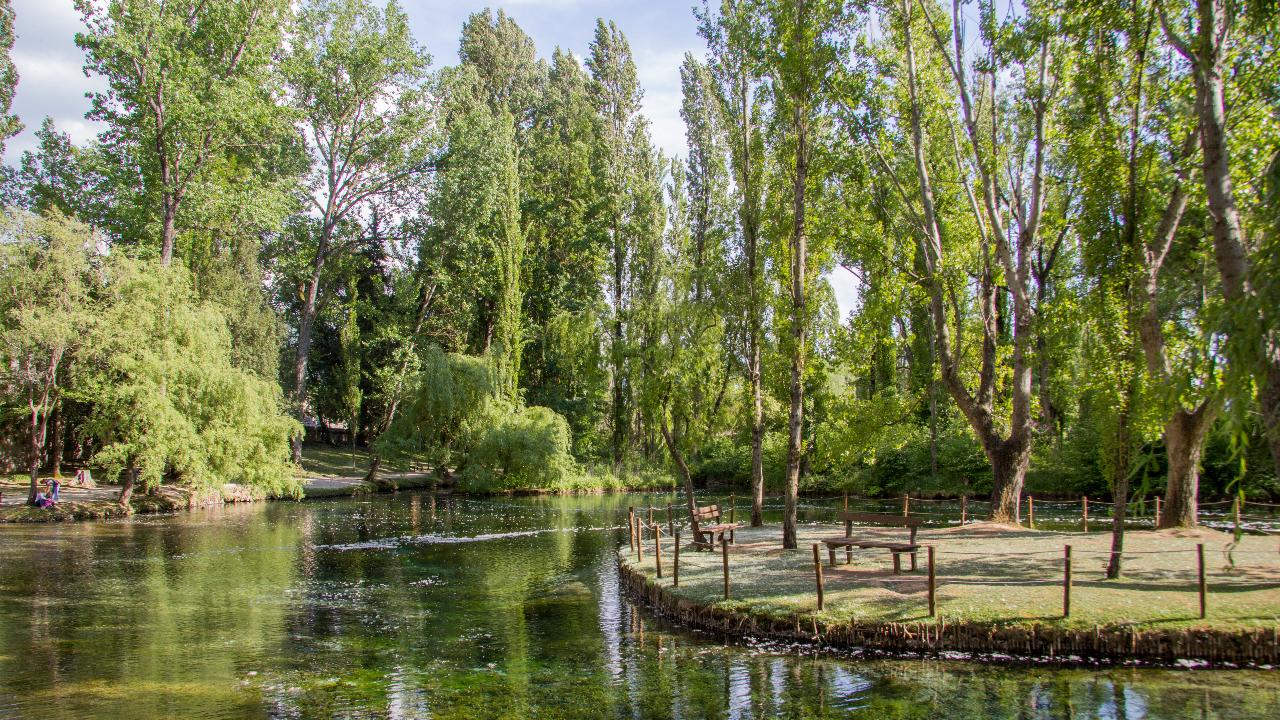 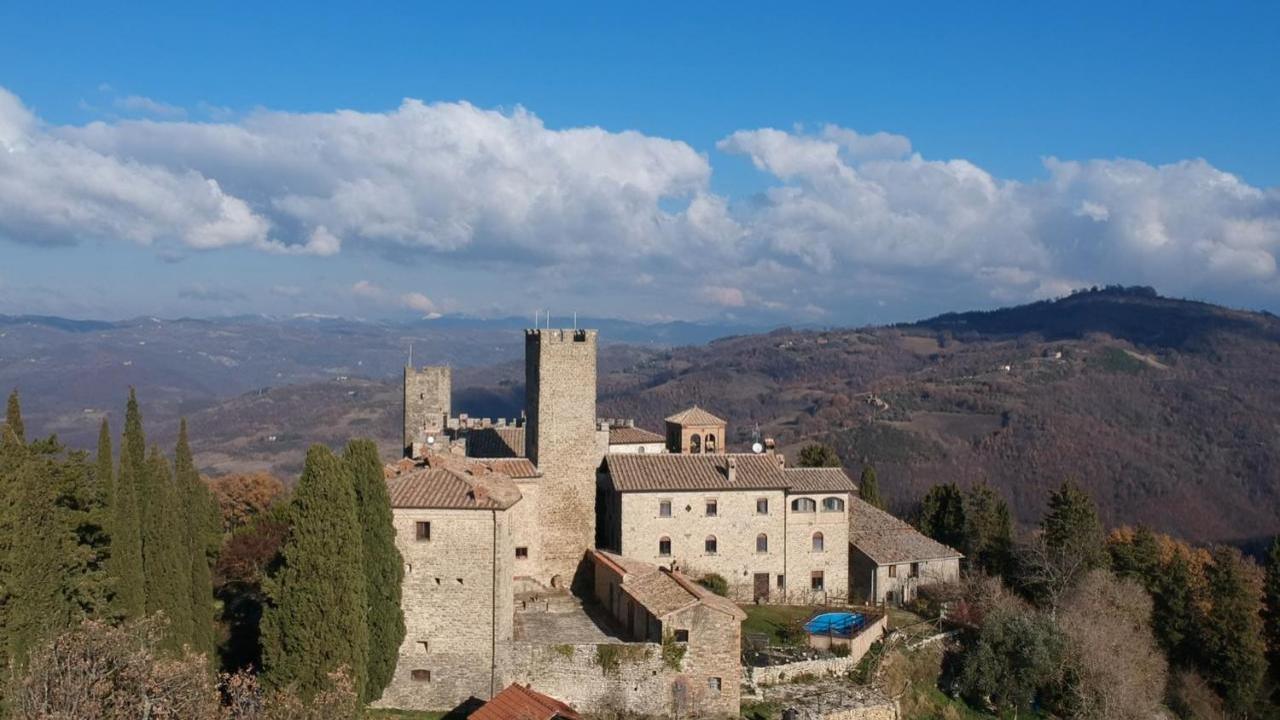 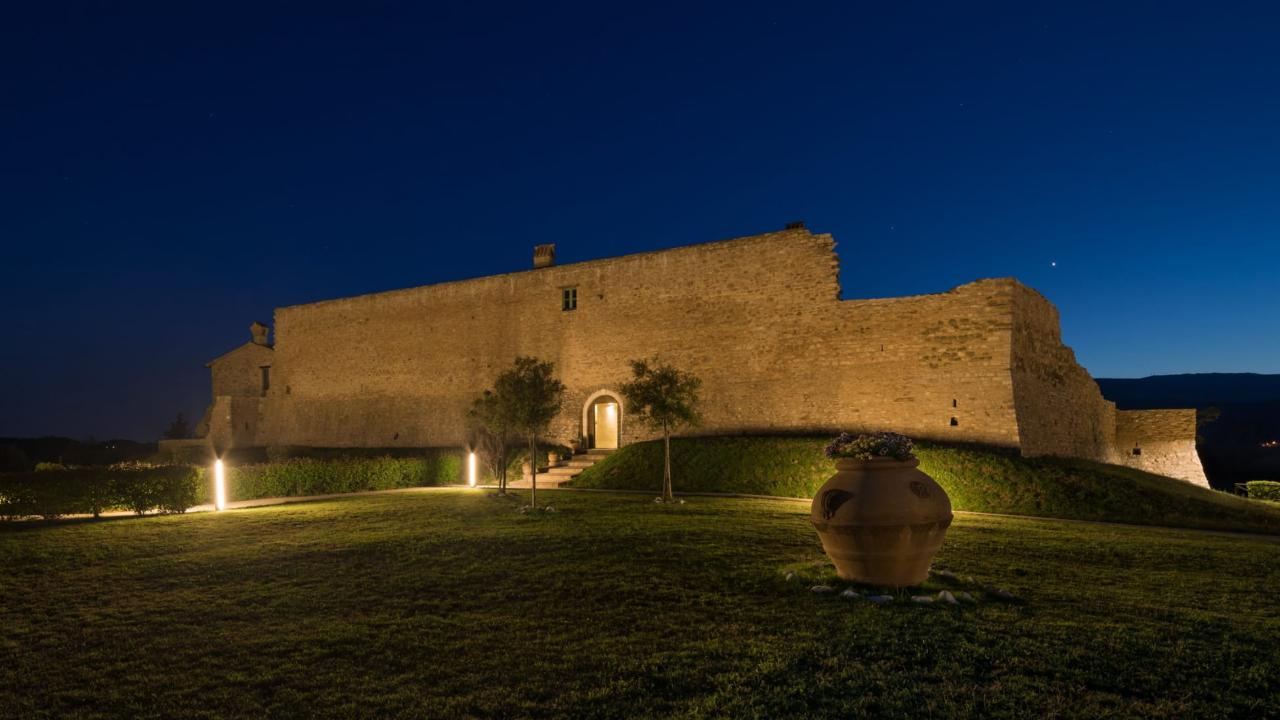 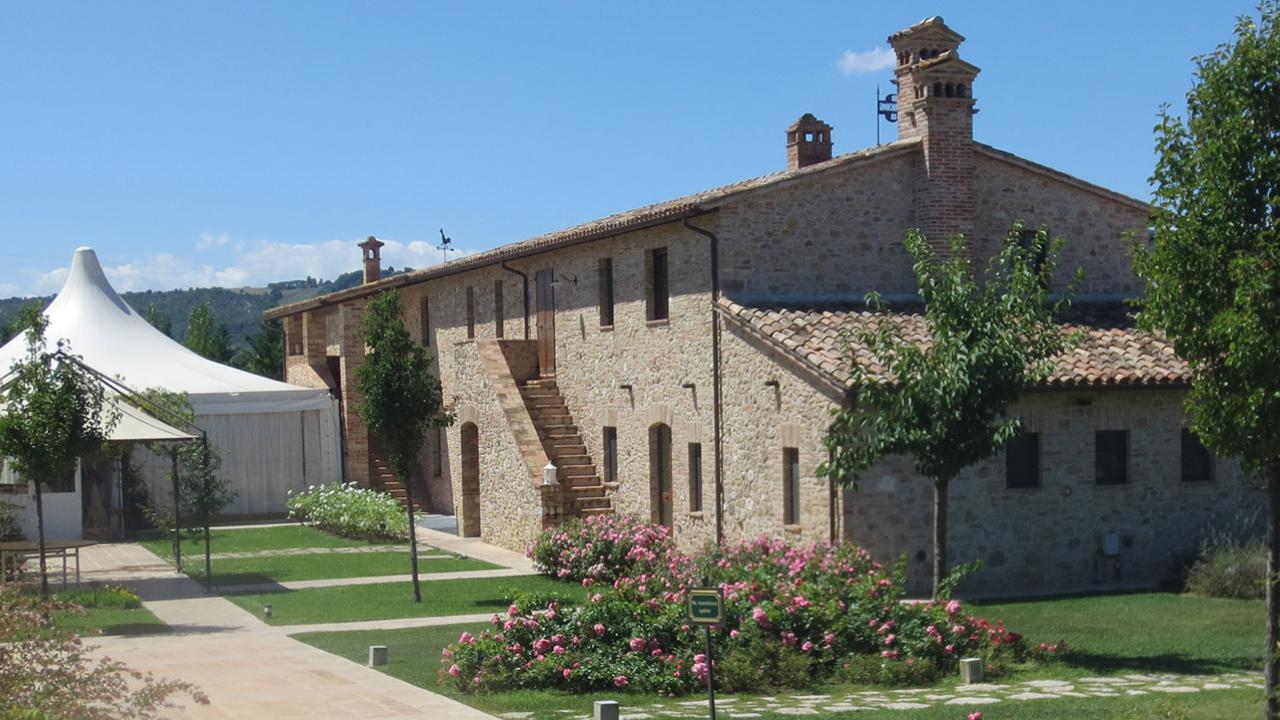 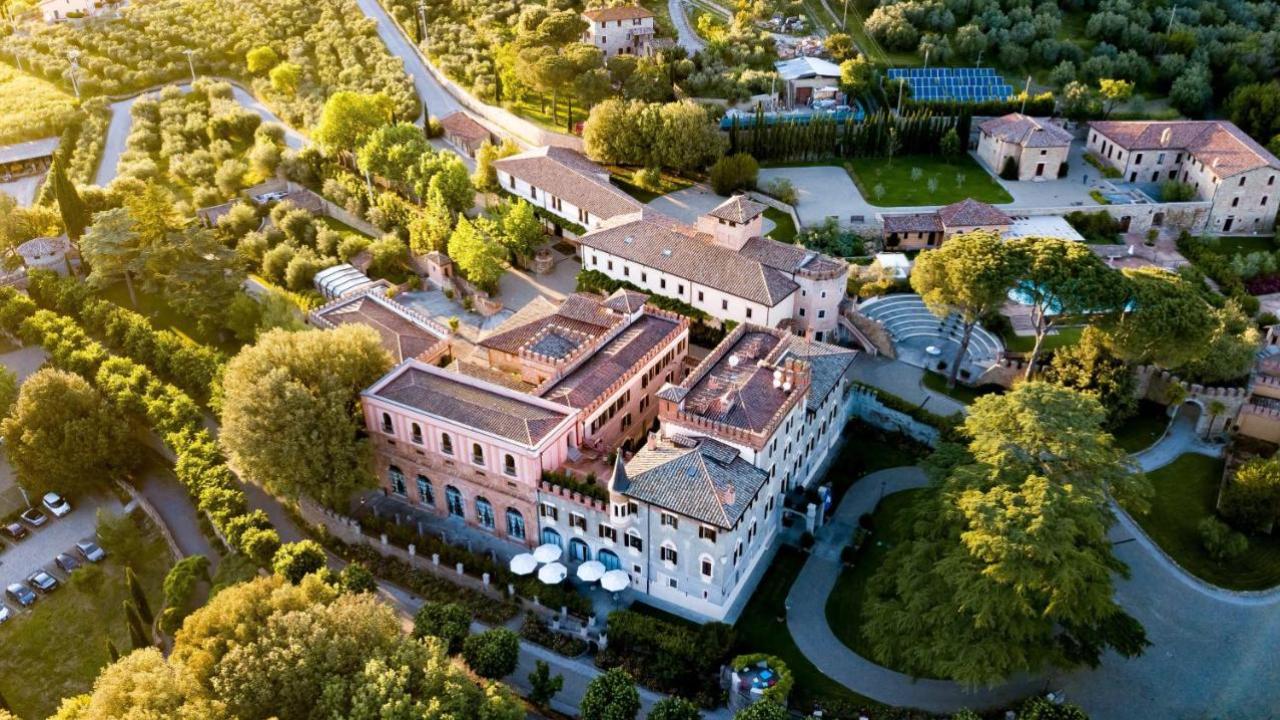 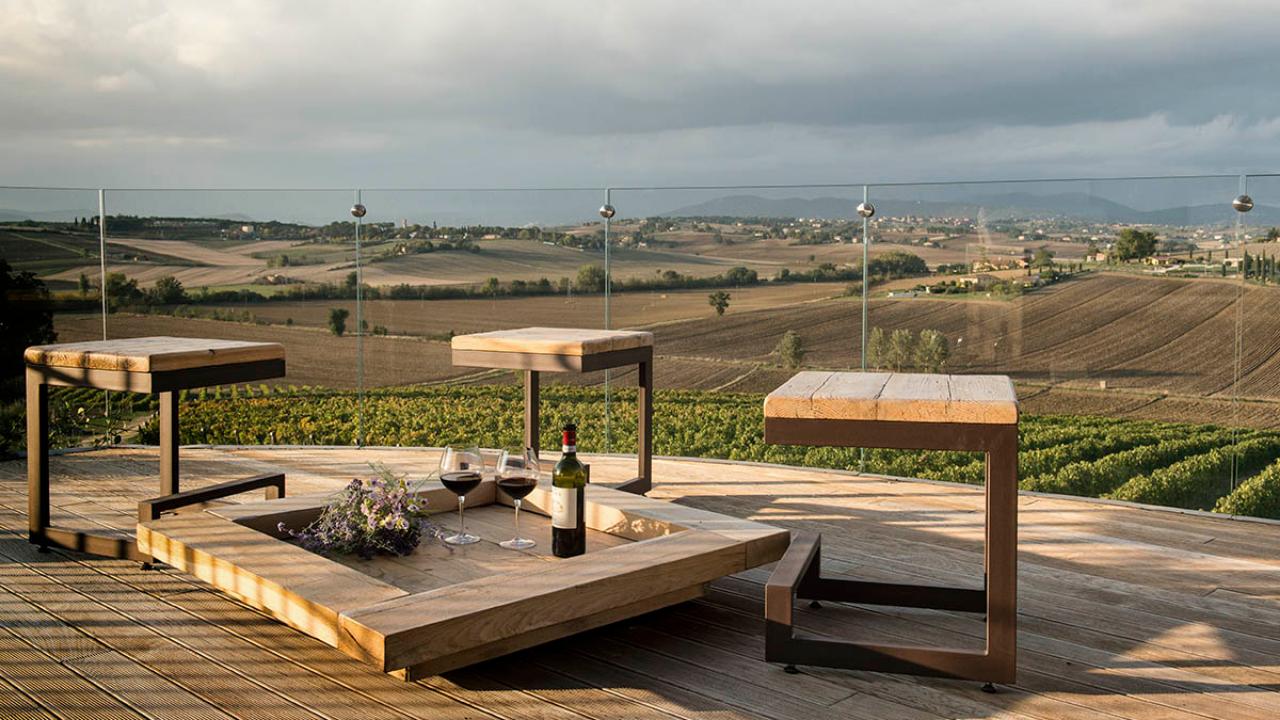 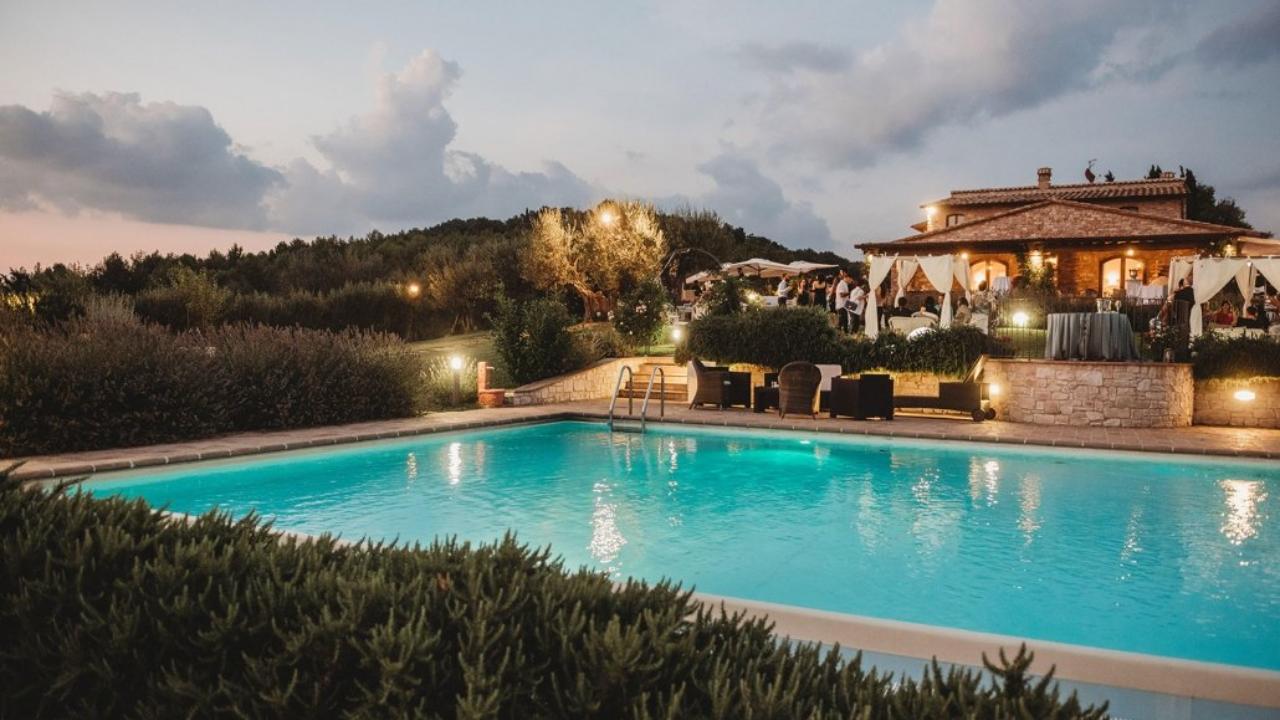 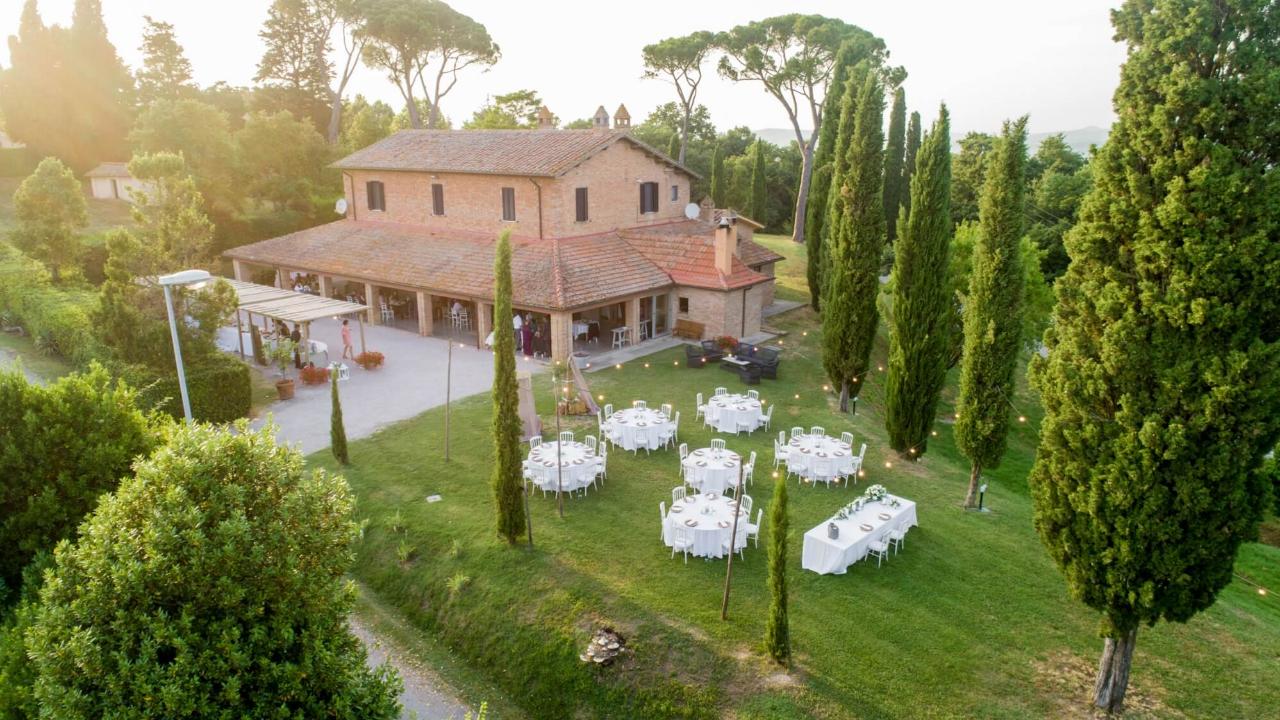 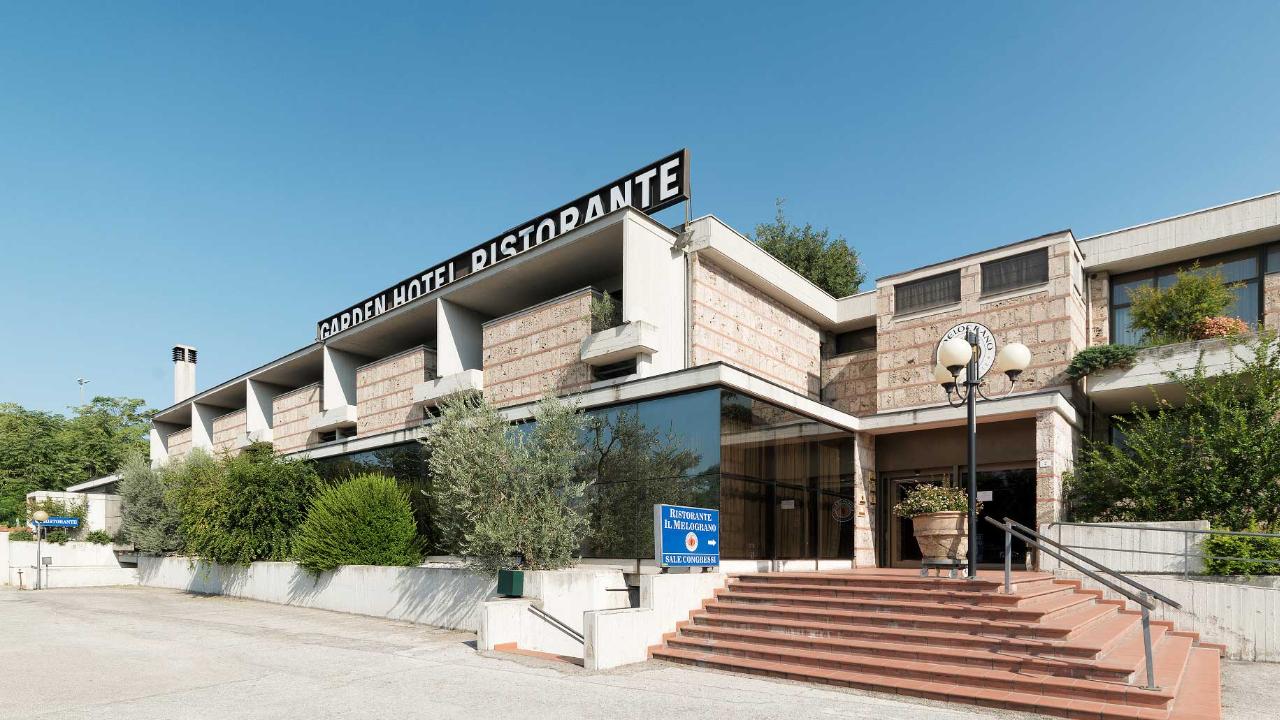